Mini presents a small crossover under the Countryman, which is only available with an electric drive from China and only without two traditional materials.

Aceman calls its new study Mini, which shows both visually and technically what the brand’s models will look like in the near future. The Aceman does not have much in common with the Paceman presented in 2011 – at most, both are SUVs. Discontinued in 2016, the Paceman was a three-door internal combustion engine Countryman with optional chrome and leather. The Aceman has four doors, is purely electric and its developers are proud that there is no chrome or leather interior for it.

Very close to the series

Design features of the Aceman will apply to the entire Mini family going forward – but at least one production model will look almost exactly like the Aceman. That means there’s a towering front end, an octagonal grille with a shiny frame, stripped-down bodywork, a long roof spoiler and plenty of Union Jack borrowings. One of the main design themes of the Aceman is the slotted hole, familiar to anyone who has slipped a bit while drilling through too soft material. It will be exciting to see if this form will be made into series production. In the study, for example, the contemporary door handles, which are flush with the body, and the orange covers for the exterior loudspeakers in the bumpers are designed in a slot design. Yes, external speakers: At least in the study, the developers assume that the individually dialed noises for the electric minis aren’t just for the occupants.

The Aceman is 4.05 meters long, 1.99 meters wide and 1.59 meters high. There is no trunk under the front hood – this is where an electric motor and control electronics are located. Viewed from the side, the wheel arches are surprisingly flared with a wide strip of plastic and engraved with the Union Jack. They house 20-inch wheels with six-spoke rims, in which a large central wishbone has been ground and which almost completely close the wheel for aerodynamic reasons. On the large panorama roof there is a roof rack, which is also in the Union Jack look – but there is no chance for this design in the series. At the rear end of the roof, a long spoiler prevents air turbulence and thus significantly improves the drag coefficient, which increases efficiency and therefore range. A subtle reference to history is found at the lower end of the A-pillars: there is a diagonal outline – the original Minis have a diagonal weld bead there, which is now apparently destined to become a sort of cult weld bead. The roof is a bit more retro – it’s British Racing Green.

A low OLED touchscreen sits at the top of the center console – the driver has no dedicated instruments.

Aceman’s Matrix LED headlights aren’t just there to block oncoming traffic when driving at night, they also provide a light show as the driver approaches and unlocks the car. As you enter, this spectacle continues inside – light shows seem to replace the bubbling exhaust fumes of the age of the internal combustion engine. Inside, the Aceman offers five seats covered in knitted and woven fabrics. In addition, the designers gave the covers a colorful pattern on which the lettering xoxo is engraved – in cat language, xoxo means “kisses and hugs”, the x representing a pursed-lip kiss and the o a hug. 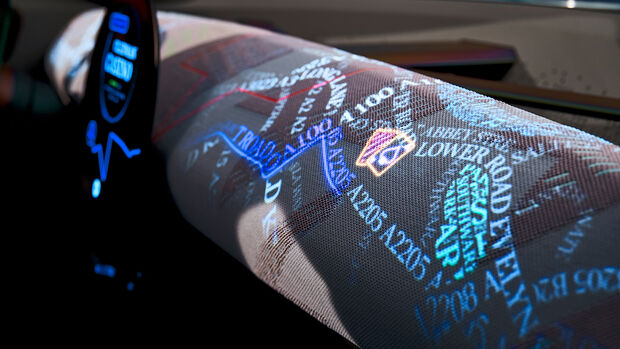 The dashboard is also a projection surface – here for an extended representation of the navigation system.

The driver no longer has his own instruments in the Mini Aceman – here OEMs have apparently been based on the Tesla Model 3 and Model Y. There, however, some drivers are building retrofit displays in the car because watching the central infotainment screen is not enough for them. This central screen is a real spectacle on the Aceman: Round and flat, it adorns the upper end of the center console and, thanks to OLED technology, its display offers deep black and strong contrasts. While the velvet sits on the steering wheel, pleasant to the touch but not suitable for mass production, the dashboard is covered with a knitted fabric and is intended to be a bit like a sound bar – an audio device that everyone knows who only realized this after buying it. their new TV that he also wants good sound. Projections onto the fabric of the dashboard are part of the lighting and menu presentation – Opel already showcasing such a technique with its Monza Concept in 2013.

As with almost all new cars, most of the classic buttons are gone from the Aceman. There are three rocker switches in the center console with an extremely fun design. The start button is clear plastic with a small rocket symbol embedded in it. The other two switches are used to select speed levels and the so-called experience mode. Fortunately, there is a classic rotary knob for the volume of the audio system. Another cheerful feature is the center console, which consists of two rails and accommodates, among other things, the inductive charging cradle for mobile devices and the elegant support systems for small items. 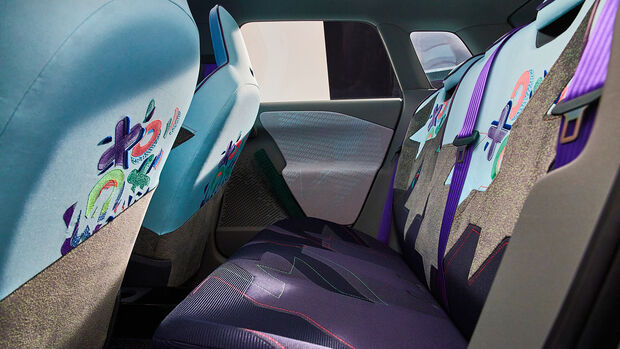 The letter combination xoxo appears in the patterns of the seats: in the language of the cat, xoxo means “kisses and hugs”.

In the Aceman, there are three of the above experience modes, which combine a few settings based on personal preference. In personal mode, the user can select his own image as the background image – this does not sound particularly new, but such a possibility is actually not yet standard with car manufacturers’ infotainment systems. The user can then surround their own background image with one of the pre-configured digital frames. The headlights in the dashboard, in turn, pick up on this topic, and there is also an appropriate soundscape. Pop-up mode provides variety when browsing. Based on predefined categories, the system suggests destinations along the route, some of which are also displayed by the dashboard spotlights. Then there’s the Vivid mode for transition breaks – for example when charging the battery. In this game mode, the user can split the Aceman lettering on the OLED screen into colorful bubbles and let them collide on the scoreboard. 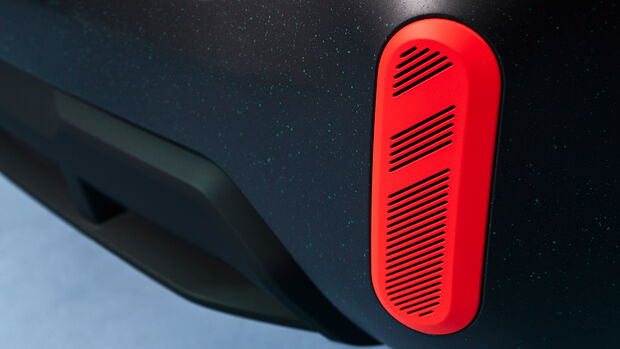 The external speakers are hidden behind a slot-like cover.

Presentation at the video game fair

There is no concrete information about the player yet. Clearly the Aceman is based on a pure electric car platform and comes from the joint venture with Chinese manufacturer Great Wall, which is called Spotlight. The main motivation for the joint venture with Great Wall was to open up the Chinese market. But, according to then-Mini boss Bernd Körber in an interview with auto motor und sport: “Mini will benefit enormously from the fact that we are developing two vehicles in China, in an environment that has such huge product demands in terms of range, battery costs, connectivity and the corresponding capabilities of the vehicle’s electrical system”. After all, according to the brand boss, “many automotive trends are no longer determined by the German environment. A manager who drives the four-cylinder in the morning to the middle ring no longer knows what mobility will be like in the future .” Spotlight is currently developing the purely electric platform for Aceman and the three-door Mini E successor, which unlike the Aceman will also be available with a combustion engine. From the end of 2023, the date of arrival of the first new models, Mini wants to completely transform from a combustion engine to electric propulsion over a period of 7 years. Spotlight’s electronic platform is capable of both front-wheel drive and all-wheel drive. Mini presents its Aceman to the public for the first time at the Gamescom video game fair in Cologne (August 24-28, 2022).

Perfect – that’s how today’s cars should be.

No, it’s still too early for electro and I really want leather in a premium car.

Don’t be afraid to shake off old habits: the Aceman shows that Mini understands the immediate future. A compact electric car with plenty of space, a chic design and state-of-the-art digital technology should meet the needs of younger people in particular. The complete absence of leather and chrome not only indicates that the age of the combustion engine is coming to an end in automotive engineering, but that a completely new era has also dawned in terms of interior design and technical priorities. . Mini takes the wishes of its customers seriously, which is the basis for securing the future of every brand.